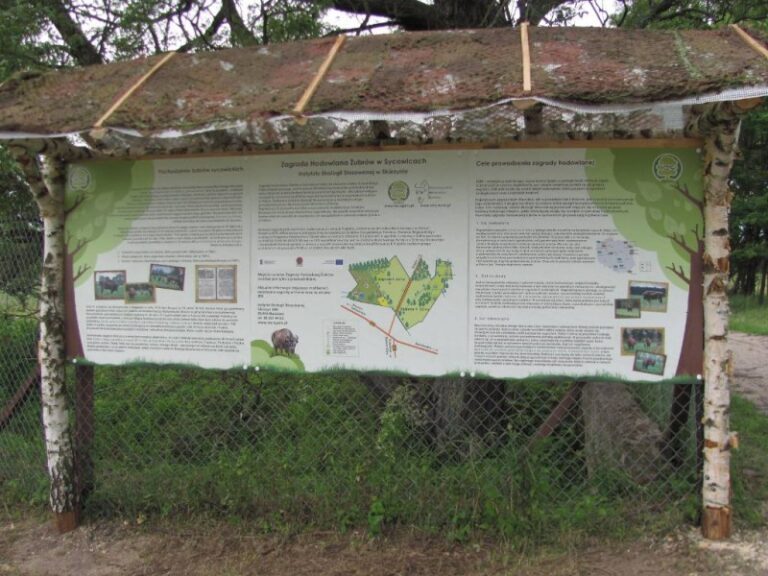 The bison breeding farm in Sycowice is located in the buffer zone of the Gryżyński Landscape Park. It is a complex of over 50 hectares of wet meadows with numerous mid-field tree stands – so it is a special place for bison. Sycowice is one of the few closed breeding farms in Poland where these wonderful mammals are self-sufficient – they live without the need for constant feeding. The farm has been operating since May 2012, when the first bison came to the farm. Since the bison live in the farm in conditions similar to the natural ones, the individual development in the herd is subject to natural selection. For this reason, the number of bison varies, new ones are born into the world, not all of which survive, others die naturally due to diseases or old age. Currently, in September 2020, the herd has seven individuals.

The location of the object

The farm constitutes of two parts,22 ha each, which gives a total area of 44 ha. 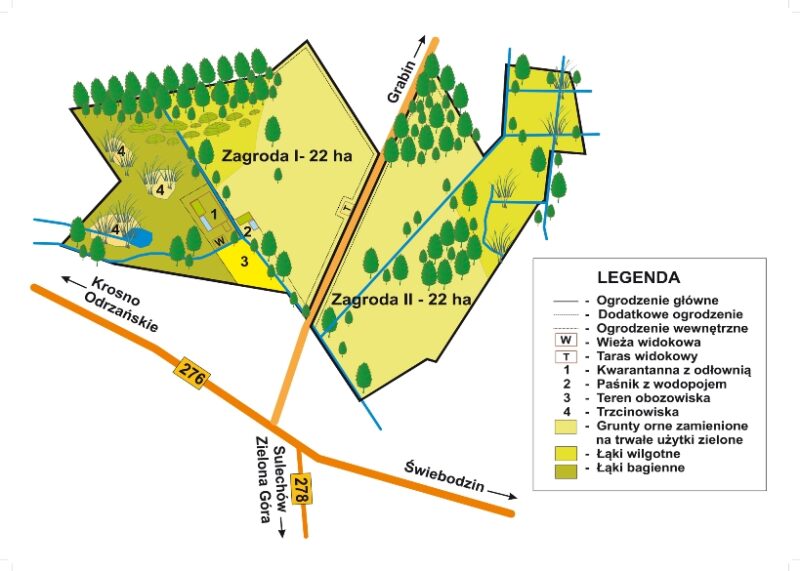 The purpose of running a bison breeding farm

European bison – the largest mammal in Europe, our pride and one of the symbols of Poland in the world. Although it was under protection during the Jagiellonian times, after World War I it was on the verge of extermination. The species was saved thanks to the animals that survived in zoos and breeding centres. The greatest threat to the bison, both in the past and now, is man and the consequences of his activities. On the other hand, it was people who made the effort to restore the existence of the bison species, the so-called restitution. The Institute of Applied Ecology decided to join this idea by building another place where bison will be able to develop in semi-natural conditions. There are 3 main goals behind the construction of a bison breeding farm in Sycowice.

It is directly related to the breeding purpose described above. The Institute would like to focus its scientific activities in this area on aspects related to the “greening” of the conditions for keeping bison in closed pens. Simply put, as part of the direct birth control observations and research on the Sycowice herd, the aim will be to create optimal breeding conditions using natural means. As a consequence, the bison from the Sycowice pen, which will be rotated as part of closed farms or included in free-living herds, should be in good physical and health condition.

Almost everyone would like to come face to face with this amazing animal. However, it should be remembered that the bison is a powerful, very strong and, above all, wild animal, which can turn out to be dangerous to humans if it feels threatened. Bison are timid by nature and avoid contact with humans, but it happens that when provoked they can attack. In the case of free herds, it happens that in search of food, bison go near human settlements. Sometimes they cause damage to agricultural crops during foraging, hence their negative perception. In view of the above, another intention of the operation of the farm in Sycowice are educational activities aimed at improving the awareness of people, including in particular the inhabitants of the Lubuskie region. These activities will concern not only the bison themselves, but also other large mammals, whose further existence in the country requires, among others, a positive attitude of society. Without a general understanding of the role and importance of wild animals in our environment, the last of them may disappear from our landscape forever.

Bison from Sycowice – their origin and characteristics

In the 16th century, in almost the entire territory of the Polish-Lithuanian Commonwealth, the bison was found in many forests. They were one of the last places of their natural occurrence in Europe, not counting the bison living in the mountains of the Caucasus. Until the end of the 18th century, free-living representatives of the species were known only from the Białowieża Primeval Forest. The next century was favourable for the then existing population, although the animal was kept mainly for hunting attractiveness, reserved for royal needs. At the beginning of the 20th century, the Białowieża herd had about 700 animals, which was an excessive density of this species for the forest area. At the turn of the 19th and 20th centuries, the beginning of the so-called second breeding sub-line begins: the Pszczyna line, from which the bison brought to Sycowice originate. Bison breeding in the Pszczyna forests (PL line) dates back to the times of Tsar Alexander II. In 1865, the prince of Pszczyna, Jan Henryk XI Hochberg, exchanged with the Russian tsar 20 deer captured in the Pszczyna forests for 4 Białowieża bison. The descendants of these bison remained under the care of the Dukes of Pszczyna until 1936. It is worth emphasizing at this point that the Pszczyna breeding was in fact based on 12 founders of Białowieża origin. This stock consisted of:

The PL line developed dynamically and in 1918 reached the number of 74 units. During this period, there was already a sharp decline in the population of free-living bison in the Białowieża Forest. It was mainly a consequence of poaching and conducted military operations. In 1919, the last bison died in the Białowieża Forest. A similar fate was shared by the Pszczyna herd, except that three animals survived the First World War; however, only two were capable of producing offspring. The herd of Pszczyna developed despite another period of war and the change of owners until 1954, when as a result of infection of the animals with foot-and-mouth disease outside, all of them, 19 at that time, died. In the mid-1960s, an initiative was taken to rebuild the Pszczyna line, which continues to develop today. Maintaining the continuity of the Pszczyna line was possible thanks to the fact that some of the animals were taken to other centres in advance. Bison from this centre came to Sycowice in May 2012; three females: Pladora, Platynka and Plątka, and one male: Plarip. They became the basis for the development of a new herd – the first in centuries in the Lubuskie Region. It can be said that after five centuries, thanks to the efforts of the Institute of Applied Ecology in Skórzyn, the European bison reappeared in this region.
Previous
Next
ZAMKNIJ